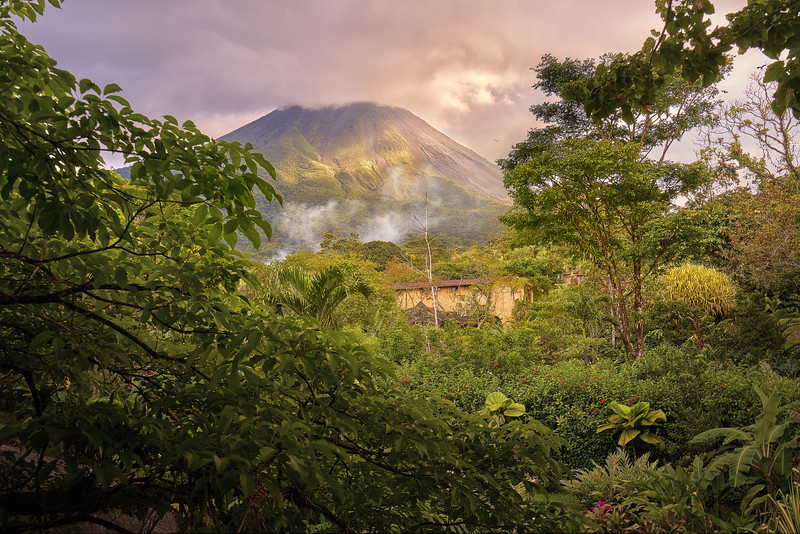 At 5,437 feet (1660 meters), Costa Rica’s Arenal Volcano looms large and ominous over the pastured green hillsides that surround its base. Arenal is what is known as a stratovolcano – a tall, symmetrical volcano that’s built upon successive layers of rock, ash and lava. Currently in a resting phase, Arenal remained the country’s most active volcano for the past 43 years. Its storied history is charged with eruptions – both major and minor – that have intimately affected the region and the people who live here. Costa Rica’s indigenous Malekus tribe believed the god of fire lived inside the volcano. The Spanish name Arenal (“sand pit”) is derived from the sandy deposits left by volcanic debris.

On Monday, July 29, 1968, at 7:30 am, the Arenal Volcano suddenly and violently erupted. The eruptions continued unabated for several days, burying over 15 square kilometers under rocks, lava and ash. When it was finally over, the eruptions had killed 87 people and buried 3 small villages – Tabacón, Pueblo Nuevo and San Luís – and affected more than 232 square kilometers of land. Crops were spoiled, property was ruined, and large amounts of livestock were killed.

At the height of its ferocious activity, the volcano flung giant rocks – some weighing several tons – more than a kilometer away at a rate of 600 meters per second. These explosions would go on to form three new active craters. As the three towns were destroyed on the western side of the volcano, a town by the name of El Borio on the east side was untouched and unharmed.

Since 2010, Arenal has been dormant. One website claims “This is a place worthy to visit and statistically not very dangerous. There is a lot of information on this area so form your own opinion.”

I shot this picture from a zipline landing pad as rare break in the clouds illuminated the north flank of the impressive volcano.

(Source: Wikipedia, jameskaiser.com and others).