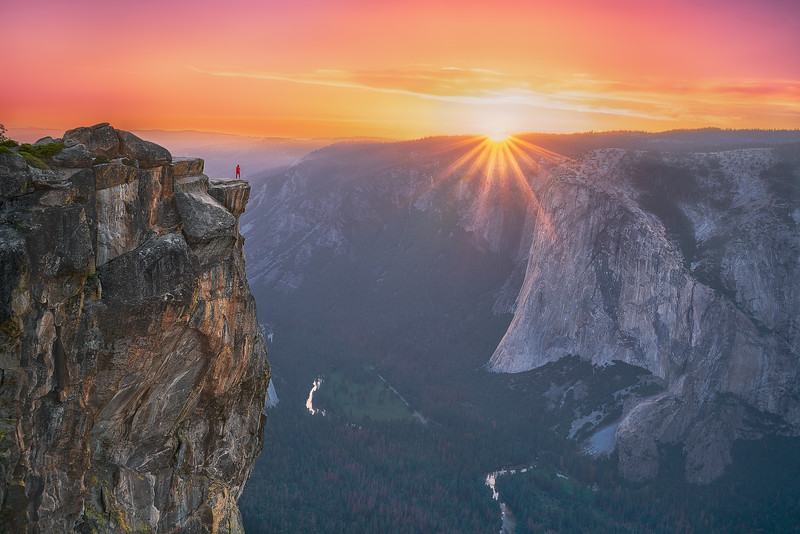 The hike to Taft Point in Yosemite is mildly strenuous for people like me and for the more athletic types, it is a fairly easy walk in the woods. It is literally a beautiful walk in the woods. About 2.2 miles (3.5 km) round trip. Feels a bit worse coming back because you have just witnessed a great sunset and hair raising heights. There are no guard rails except at one place, Taft Point behind which I had my tripod set up. On the way in, I showed my group several plants that we find in nurseries and we pay a fortune for them. Out here they just grew wild and were a lot prettier.

On the way here, Wisanu asked me if I would like to be the human element in the scene and before I could reply, Nayana said “Dad! I forbid you from doing risky stuff and mommy will be mad”. There ended my hopes of emulating the Boonrawds. Seriously, walking around here requires you to be careful since there fissures in the rock. Fissures are basically enormous cracks in the rock that is about a kilometer high.

Hazards: The dropoff at Taft Point is steep, and a fall would be not just fatal, but squish-you-like-a-bug fatal. The fall is so far that your friends, waving their teary goodbyes and hoping you didn't have the only set of car keys, would lose sight of you before you reached the ground. So be careful. ( yosemitehikes.com)

The granite monolith on the right is El Capitan. El Capitan is the world's largest granite monolith, rising 3,000 feet (900 meters) above the valley floor. A Taft Point, though, you're looking down on El Cap, so you can imagine what it's like looking straight down at the same valley floor while you're leaning over the railings here. Definitely not a place for people with fear of heights.

There were some people that crawled on their belly up to the edge of the rock and threw small stones to see if they can follow them to the ground. I am sure they lost track of them after a second or two. While I was setting up my camera here, Nayana threw some pieces of wood to see where they went and they swiftly just disappeared in the air.

It was interesting to see a newly wed couple arrive to have pictures taken on the outcrop where the lovely and intrepid Sasi NaHm Boonrawd is standing. The one question that crossed my mind was how the bride managed to hike up a mile in that pretty wedding gown she was wearing. I have a picture of the newly weds in another picture but for this one, the piece de resistance is the patience and nerves shown by Sasi NaHm.

There were other photographers who showed up soon after we did. We arrived a good one hour before this time. There was a young friendly photographer who was dispensing mostly good advice to anyone that he made eye contact with. He planted a seed of doubt in my mind about using a Circular Polarizer, a filter that would cut out some of the haze. I tried it and that was of no use. The CPL quickly came off and only way we could see the valley below is to wait for the Sun to go down.

During this time, Wisanu communicated with NaHm using a walkie talkie. She kept going back while allowing the other folks there to take pictures and patiently standing still which enabled Wisanu and I to shoot from this spot.

Surprisingly when the light was the best, we were the only ones shooting. All the other photographers had left before then. As we were leaving a few minutes later we turned back to look at the clouds to the right of this frame light up in magical colors. But it was time to go back to the car and we began our hike back in near darkness with our headlamps on.