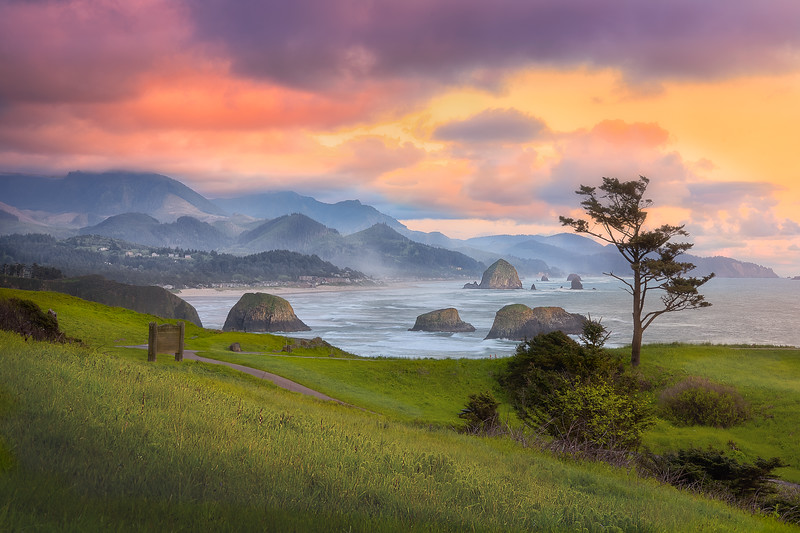 Needles and the Haystack

An affluent tourist resort destination and landscape photographer bucket list item is the Cannon Beach in Oregon. Cannon Beach is recognized by its well-known landmark, Haystack Rock. This igneous rock has an elevation of 235 feet (72 m) and is often accessible at low tide, especially in the summertime. There is a small cave system that penetrates the rock and can be seen from the coastline. The rock is also protected as a marine sanctuary. There are at least six other geographic features in Oregon named Haystack Rock, including two others along the Oregon Coast — and others throughout the U.S. Haystack Rock here is accompanied by several smaller rocks known as The Needles. (Now you figured the caption!)
This view however is of the Cannon Beach as seen from Ecola State Park from a distance of about 2.5 miles (4km).
Captain William Clark of ‘Lewis and Clark’ fame and 12 members of the Corps of Discovery traveled through what is now the Ecola State Park in 1806 in search of a beached whale near present-day Cannon Beach.  After scaling the north slope of Tillamook Head and reaching one of its viewpoints, Clarke described the vista as “… the grandest and most pleasing prospects which my eyes ever surveyed…”

It was a few minutes after sundown and the glowing embers were on their last breaths. This is a fairly easy place to access and has been photographed innumerable times before. But I suspect, this might have been one of those near ideal conditions a landscape photographer could hope for.